The Turk an' wot E' Smokes 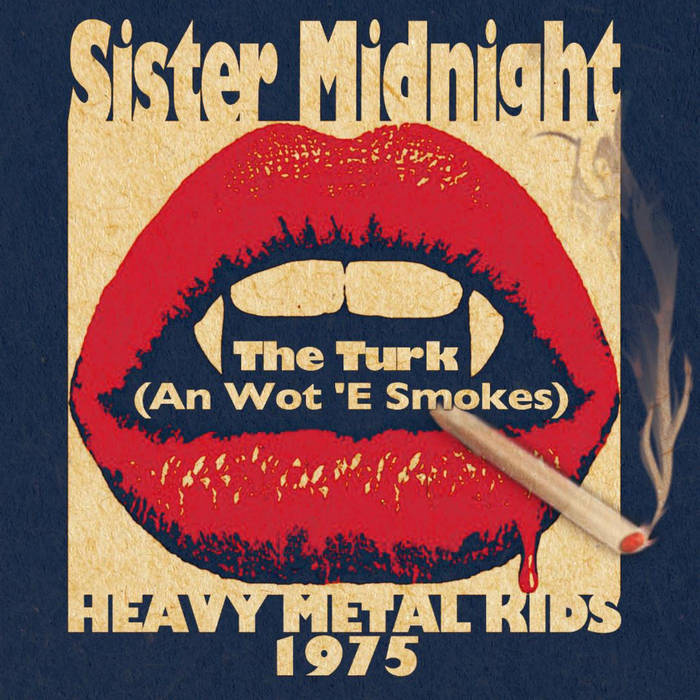 zzzptm There was no reason to leave behind the NWOBHM sound, there was nothing wrong with it. Sister Midnight knows this truth, and it's evident in this tasty track.

Colin M. Sister Midnight strikes again with another delightful retro cover of a song I'd hadn't heard of before. I dig it.

Paddy C. Excellent sound on this instrumental. Hats off to Steve Darrow.

The Turk (An Wot’E Smokes)

A 4/20 gift from Sister Midnight to you. A ’Smokin’ instrumental exercise in Hard Rock power chord pyrotechnics, originally recorded in 1975 by UK’s ‘The Heavy Metal Kid’s’ (also known later as ‘The Kid’s)
Contrary to what the band’s name implies, they weren’t really a Heavy Metal band at all, but they definitely laid the foundation for what would become ‘HM’ in later years. They had plenty of ball’s out, Heavy rude & rebellious Rock anthems in their catalog, but still where not a strictly a Hard rock band at all. Lot’s of Ballad’s, Old time boogie and strait up 70’s brit pop as well. So some listeners get the wrong idea about this band, but this tune in particular, was Hard as anybody in 1975, harder than most.

The bands singer, Gary Holton (R.I.P) was a classic theatrical R 'n' R bad boy/trouble maker, on & off stage. He was right in league with the classic early Gravel-voiced frontmen of Hard Rock ALA: Steve Marriott, Noddy Holder, Alex Harvey, Michael Des Barres, Bon Scott etc.
But he was probably better known in the UK for his acting on TV & Stage all through the 1970’s & 80’s.

The HMK where a bit too ‘diverse’ for their own good. While having a strong cult/club following in the UK, they where too hard to pigeonhole into one genre…not quite completely a Glam, Metal, Pop or New Wave band. Holton even filled in as temp lead singer for The Damned (who where HMK fans before in the early days), for a short tour in the late 70’s, when Singer Dave Vanian fell too ill to hit the road. That’s an honor for sure.
In any case, check out the original version of this song & the rest of the HMK catalog if you’re a true Rock N Roll Doctor. If not, well, move along…Nothing to see here.