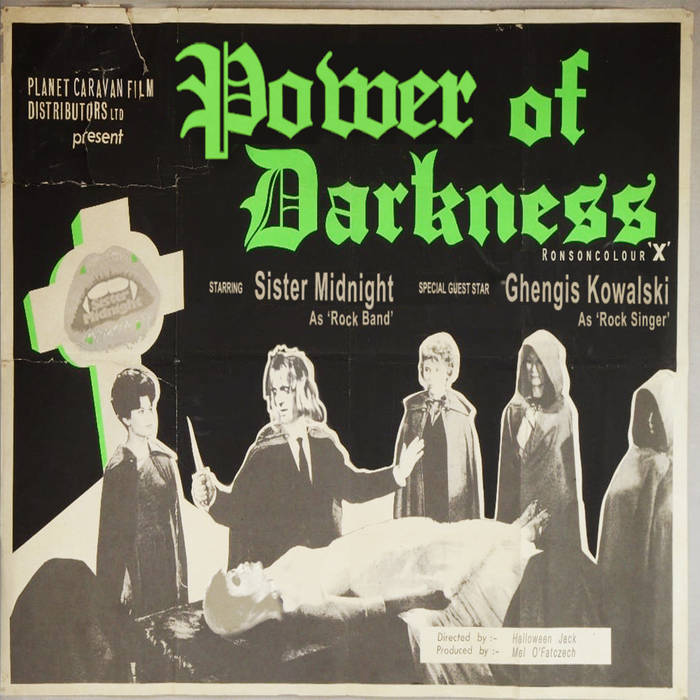 zzzptm Sister Midnight gives us a great cover, with guitar lines I'm going to relish for a good deal of time to come.

JF The track itself is pretty great, but it's the Five Years fake intro that made me stop what I was doing to listen.

Chris Bonfiglio I've had the original 45 by Ronno since it came out. It was always a favorite. What a great redux by Sister Midnight. Power metal at its best!

A Halloween 2019 gift to you-
POWER OF DARKNESS-Featuring the guest vocal stylings of Ghengis Kowalski.

‘Power of Darkness’ originally recorded in 1971 by the band Ronno. Featuring of course Mick 'Ronno' Ronson, better known as David Bowie‘s guitar hero/secret weapon from his rocking early years, circa 1970-73.
In fact Ronno, as a band was basically what later became ‘The Spiders from Mars’
Ronno never released a full LP, only released one single, that single's B-Side ‘Power of Darkness’ appeared on various promo-only Vertigo swirl label sampler LP's in Peru of all places, alongside of Black Sabbath, Warhorse, Beggers Opera and other Heavies of 1971.

This is actually a blistering High Energy/Lo-Fi garage rock tune, with very little in common with David Bowie at all. More along the lines of UK heavy blues rock, Proto metal artists like The Jeff Beck group, Humble Pie, Deep Purple etc. Lyrically, it’s about as Doomy and demonic as any Sabbath, Coven or Black Widow song of the era, but with a fist pumping, sing along chorus and danceable beat.

Our longtime buddy Ghengis Kowalski, also a longtime Ronson fan, laid down the Raging vocal track on this Slab of demonic Decadence.