The Second Coming of Heavy: Chapter 8

by Ride the Sun/ The Trikes 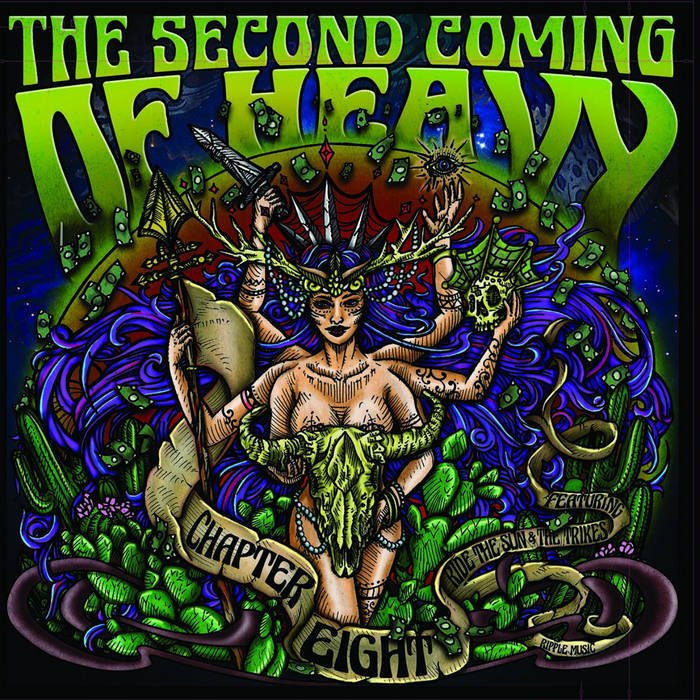 doomcrew Picked this up for Ride the sun.Been a fan for a while.these guys rock hard very similar to c.o.c. Favorite track: Karma Wastes.

Colin M. I can't say I was terribly familiar with either band going into this, but rest assured after yet another sizzling entry into the Second Coming series, I will be checking both out. I especially love the heavy blues rock of The Trikes. Favorite track: Be Yourself.

FDJ Ripple Music continue their superb Second Coming of Heavy series with yet another two excellent hard rock/stoner blues bands worthy of your attention. Butt-kicking and gnarly-assed are two phrases that come to mind here. Favorite track: 5 On 4.

“For record collectors who coo over coloured vinyl and artwork deserving of a place on the wall, the Second Coming of Heavy series is a fine example of how stoner, doom and psych is leading the way in offering the full package.”
METAL HAMMER

Already recognised as one of the world's leading purveyors of Rock ‘n’ Roll, Stoner, Doom and Heavy Psych, Ripple Music upped the ante in 2015 with the arrival of one of their most ambitious projects to date, The Second Coming of Heavy Series.

Serving as an ongoing showcase for some of the best and heaviest bands emerging from the underground, each instalment shines a light on those worthy of your attention. Consisting of one, 12” slab of multi-coloured vinyl with full colour sleeves and inserts, the series is designed to be saved and treasured, like a fine anthology of books. So much so when the albums are filed next to each other, the complete collection of aligned spines form a mind-blowing image direct from the underground.

Bands that have already featured in the series include Geezer, Borracho, Supervoid, Red Desert, Kingnomad, Bonehawk, Red Mesa, Blue Sanggletooth, Fuzz Evil, Switchblade Jesus plus a whole host of others. For this latest instalment it’s the turn of Southern Californian stoner rockers Ride The Sun and heavy Dresden-based bombers, The Trikes.

The Second Coming Of Heavy; Chapter VIII will get an official vinyl release on 4th May 2018 and is limited to 300 copies in three alternative versions (100 of each) – The Resurrection Edition, The Risen OBI and The Ascension Edition.

“Ripple Music is fast becoming the label of choice for good old fashioned heavy metal. They have released some great albums over the past twelve months, their latest being this split release featuring Supervoid and Red Desert [...] two great bands and another great release from Ripple.”
POWERPLAY MAGAZINE

“I've long thought that The Second Coming Of Heavy series was one of the coolest things happening among a flock of cool things that Ripple Music has going on. The latest submission to this series, appropriately titled The Second Coming Of Heavy: Chapter 2 is a split between Supervoid and Red Desert. Featuring the fuzzed out tones that make so much of this classic rock and roll stuff so worthwhile, these two bands prove that they both deserve a place in a scene crowded by posers and chumps.”
TWO GUYS METAL REVIEWS

“Ripple Music believes we are in the midst of a heavy rock renaissance. Two editions deep, they’ve already highlighted a range of styles and a swath of acts from around different regions of the US brought together by their varied takes on what it means to be heavy. There’s a lot of ground to cover, and the project remains ambitious, but taking it one LP at a time, there seems to be nothing keeping the label from continuing this exploration and enlightening listeners as they go.”
THE OBELISK