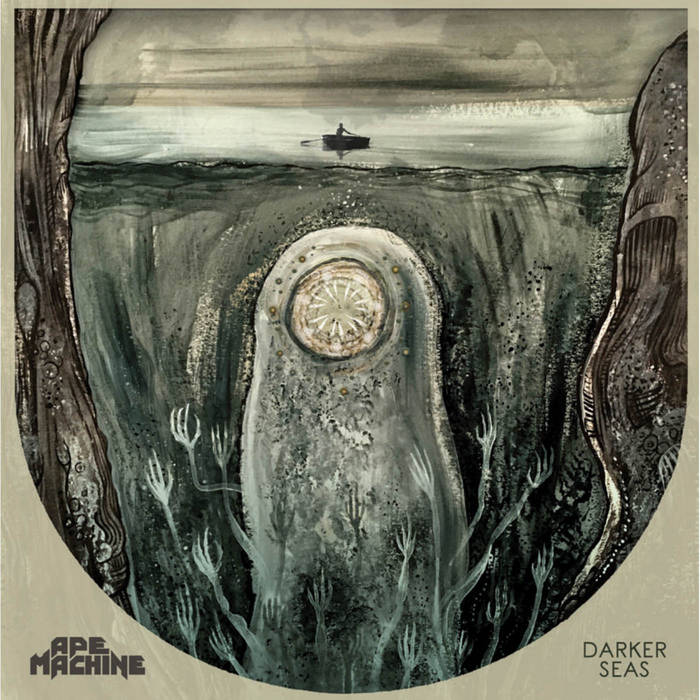 CoughCool After listening to Mangled By The Machine so much, I had to snag this. Top-notch classic stoner rock of the utmost
💀💀💀🍄🍄🍄😵😵😵 Favorite track: Into The Shredder.

muschiosauro Is it possible to draw inspiration from 70s prog-driven heavy rock withouth sounding neither derivative nor nostalgic? Yes, and Ape Machine are here to prove it with their muscular yet unconventional and uniquely engaging songwriting, unpredictable guitar lines, and surprising vocal flows. Great album all the way through. Favorite track: Piper's Rats.

FDJ Ape Machine have always been a band totally on top of their game but with "Darker Seas" the band have passed all expectations
Full review here …. stonerking1.blogspot.com/2018/09/ape-machine-darker-seas-review.html Favorite track: Watch What You Say.

Bucky Ape Machine have generated an ominous current of angular riffs, intricate dynamics, well refined rhythm, and groove heavy enough to sink the Titanic. Darker Sea's pulls us beneath the mainstream surface once again with its virulent flood of dark harmony and neck snapping rigor. Favorite track: The Contract.

Portland, OR power rock band, Ape Machine, will release its new LP, Darker Seas, on September 7 via Ripple Music. The group's fifth and latest album was recorded with punk legend Steve Hanford, producer and former Poison Idea drummer, who has since joined Ape Machine on drums. Darker Seas is described by the band as "heavier and more progressive than previous records but also more structured and cinematic."

Along with fellow Portland, OR-based heavyweights Red Fang and Danava, the high-powered quartet Ape Machine has been making it’s modern take on vintage hard rock for the better part of the past decade. Ape Machine has been called “a rock and roll band with a finger on the pulse of the 70′s and their asses firmly in the present” and “real heavy-psych for the iPhone generation” that delivers “true guts and glory rock and roll.” Formed by singer Caleb Heinze and guitarist Ian Watts, the group self-released their first album, entitled This House Has Been Condemned, in 2010. The name APE MACHINE is a nod to the days of reel-to-reel magnetic tape audio recording; a fitting moniker as the band plays through vintage tube amplifiers and lays down its songs using exclusively throwback quality studio equipment. Perhaps San Francisco's CBS TV affiliate, KPIX 5, said it best when it noted that, "Plenty of acid rock groups know how to put together solid riffs, but Ape Machine manage to nod to cornerstone influences like Led Zeppelin and Black Sabbath and still write original songs steeped in blues and heavy psychedelia."

The making of the new album, Darker Seas, saw the band experience death and rebirth in more ways than one. During the making of the record, Caleb and Ian lost a mother and father respectively, and Brian experienced the birth of his first child, a son. The band went nearly bankrupt from relentless touring and untimely vehicle failures, but ultimately developed an unshakable determination and resolve to deliver the message of the music. Musically, Darker Seas reflects the personal struggles of the band and its members but also the patience developed by living through it all.

"Sonically, 'Darker Seas' takes on new territory for the band with use of vocal harmonies, melodic guitar harmonies and even some Cello on "Nocturne in D Flat (The Jester)," says Watts. "The songs paint a picture of trial, hardship, pain and optimism all at the same time."

"Blending equal parts rock 'n' roll, blues, stoner rock and psychedelia, Ape Machine is a band whose heart is steeped in the rich musical history of the late '60s and '70s. That doesn't mean they're some kind of hippie dippy throwback band. Ape Machine delivers their material with heavy metal muscle and all of their arrangements are sharpened by Ian Watts' ballsy guitar work." - NOISECREEP